S: What is your relationship to Pakistan? Other than it being a home of your ancestors, you draw a lot of visual references from the region especially from the Mughal era, the dance, the aesthetics and the folklore.

Q: Perhaps it is what I cannot see that draws me to the idea of Pakistan. The unseen forms that cohabit with us and memories of what once was. I have always felt driven to restore or share glimpses of unrequited desires which are not necessarily mine.

S: You have been a student of Nahid Siddiqi and have also collaborated with her, how have you maintained that relationship and continued to learn over the long distance?

Q: I still very much am her student-shahgird. We never stop learning and it is reciprocal. I met Nahid in 1993 and have journeyed with her since; absorbing, inquiring and understanding the form of kathak, of storytelling. Over the years I have worked with her as a production dancer as well as written, collaborated and performed with her. Physical distance has never mattered to either one of us - we are unconditionally there for one another insha’Allah.

Q: In 2003 I visited Karachi for an Arts Council England funded project. I researched and developed a body of work entitled ‘Only the moon to play with’ in which I explored facets of personal and diasporic cultural identity through stories, memorabilia and artefacts. I presented lecture demonstrations, orchestrated several salon-like discussions and performance workshops with artists, faculty and students at Indus Valley School of Art and Architecture (Karachi), and at Beaconhouse National University & National College Arts (Lahore). I was invited to Lahore again in 2007 as International Resident Artist working with the MA Hons Visual Art Programme at NCA. In 2008 I was made Associate Professor and worked at the Islamabad campus setting up the Theatre Arts Programme.

S: The workshop in 2007 also ended in a performative collaborative work called 'Dropping tears together'. How did it come together, what was the intent?

Q: During my tenure at NCA Lahore I devised and directed a work entitled Dropping Tears Together. The piece was constructed in a live art workshop with artists from the Masters Degree Programme. For 6 weeks we shared, remembered, retold and fictionalised the truths we held close to our being. I remember making this work without any theatrical scaffolding. I literally pulled the final piece out of a hat when we got to Alhamra Art Gallery where it was to be performed the next day. That was where the big reveal was in terms of the mechanics of the piece and the chopping of onions as an everyday domestic act; mundane yet symbolic. It all came together, and we dropped tears for our own and collective reasons. Because it was open to a limited audience at a time it lent itself to a certain intimacy and intensity.

S: It continues to be performed by the dual collective of Rabbya and Hurmat. How do you negotiate authorship and credit? Is that important for you?

Q: Yes, most recently at the Karachi Biennial. Rabbya and Hurmat did approach me when they first started to explore the work as students in Chicago. I am delighted that they continue to perform the piece regardless of authorship and credit. What matters are the memories, influences and experiences we embody and carry with us. They did invite me to write a foreword to a catalogue of their exhibition at Rohtas II Gallery, Lahore. In fact, there was a photographic series in that show where the three of us collaborated.

S: British-Pakistani community generally viewed as conservative, your work is radical and provocative, how do you negotiate your space?

Q: It depends on who is viewing and what aspects one chooses to focus on. Notions of being conservative, radical or provocative are readings mostly made by others – and perhaps not always the intention of the maker. I think being authentic yet playful with the stories I transmit through my work are the points at which I feel the strongest connection with those around me – both seen and unseen. 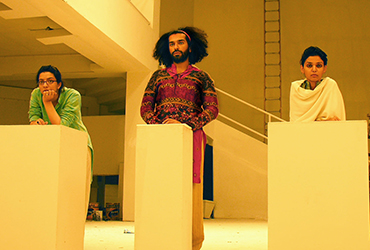 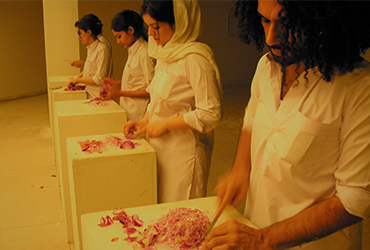 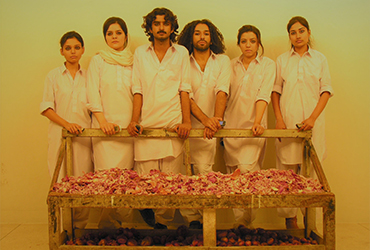